CLONAKILTY NAMED BEST TOWN IN THE UK AND IRELAND 2017 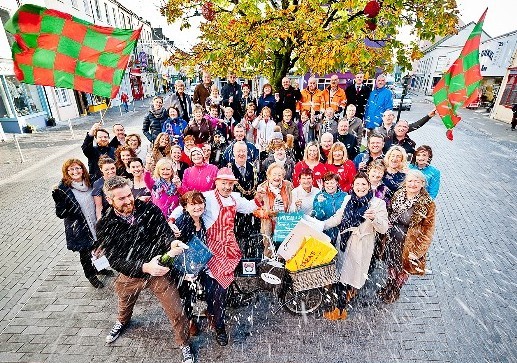 Clonakilty, West Cork, Ireland was delighted to be named Best Town in the UK and Ireland at the 2017 Urbanism Awards Ceremony.

The award is one of five given out annually by The Academy of Urbanism, to recognise the best, most enduring or most improved urban environments. The market town of Clonakilty has won this year’s Great Town Award. The quality of the design and maintenance of the public realm in Clonakilty is exemplary; particularly the main street with its bespoke paving features and street seating, and also the reclaim and redesign of Emmet Square, which has been done to a very high standard. The town was also credited for its volunteered and sponsored Clonbike scheme and its town architect in the community model.

The assessment team of the Great Town Award noted “The quality of the town centre and the town’s location close to the sea and beautiful beaches make it an attractive place to live, do business and visit. Clonakilty is a good example of those three elements coming together in a sustainable way that celebrates local distinctiveness, tradition, entrepreneurialism and a strong sense of local pride.”

The assessors also credited the town for being particularly welcoming and embracing new ideas and concept wholeheartedly.

Steven Bee, chair of the Academy said “Clonakilty has a distinctive physical character derived from its setting and its Georgian and Victorian heritage.  This was disturbed by traffic management in the mid-twentieth century, but is now being recovered, with significant social and economic benefits. The role of the Town Architect and Town Mayor in encouraging participation in the planning, and implementation of improvements have been key. Refreshed open spaces and improved links have restored the town’s character and pride, and stimulated tourism”.

We stayed in Clonakilty for 4 nights and loved it. So much to do. Beautiful beaches. Lovely pubs and such friendly people! Can't wait to come back!

A charming, yet cosmopolitan little gem, set in a stunningly beautiful part of the Emerals Isle. Great food, friendly people with immense sense of civic responsibility. Do not miss the music scene.

I love Clonakility! Whenever we visit the Cork area we can't resit a stop off! Great Cafes & Restaurants. Very Pretty Town, bustling with life and Activity!!!!

A great town vibrant and pretty. Always plenty to do. Always clean and with the most friendly people. A must visit for both visitors to Ireland and native Irish. Great pubs, cafes and restaurants.

We found Clonakilty to be one of if not the friendliest place we've ever visited. The people of "Clon " treated us like we had lived there our whole lives.They welcomed us into their lives like we were family.

Great town ."The people are Splendid" to use a quote of the towns most Famous famous residence Michael Collins. The food and choice of food is excellent, the layout of the town with it meandering streets creates an intimacy with this place.

JavaScript is required in order fully to use this site. Please enable it now and reload the page.